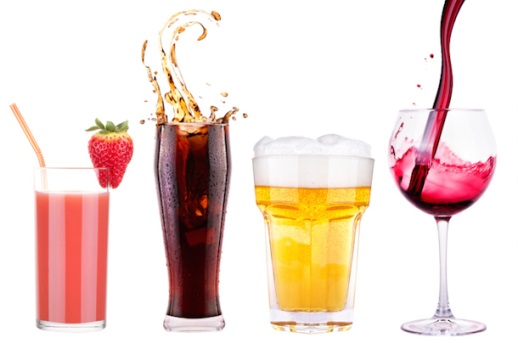 By Sean Kennedy June 18, 2018 December 18th, 2021 No Comments
Whether you are trying to lose weight or just maintain it, it’s a good idea to limit your intake of liquid calories. Most Americans only count the calories they get from solid foods, and many are unaware of how liquid calories are sneaking into their diet and affecting their body weight.
A study commissioned by the Milk Processor Education Program found that liquids make up 22 percent of calories in the average American’s diet.
As of 2016, the average American drank about 39 gallons of soda a year—or about eight 12-ounce cans a week—according to the Beverage Marketing Corp.
Yet, soda isn’t the only culprit. Though soda sales have fallen, Americans are still getting lots of unnecessary calories from fruit juice, fruit drinks, sports drinks, energy drinks, sweetened teas and sweetened coffee beverages. In fact, sugar drinks are the single-largest source of calories from added sugar in the American diet.
A typical 12-ounce can of regular cola contains nearly 9 teaspoons of added sugars; a 20-ounce bottle contains 15.5 teaspoons of sugars. Yet, the American Heart Association recommends a maximum daily intake of 6 teaspoons of added sugars for women and 9 teaspoons for men.
Sodas are the perfect example of empty calories. There is virtually no nutrition or useful quality in soda, which is full of unhealthy additives and preservatives, such as artificial colors, phosphoric acid and bicarbonate. This is why cutting back on liquid calories may be more valuable than cutting back on calories from solid food.
Generally speaking, calories from fluids are not satiating and don’t suppress hunger, which means you can consume a lot of liquid calories without ever feeling full. That can lead to overconsumption and weight gain.
After you ingest sugar, glucose enters your bloodstream and your pancreas immediately begins making insulin to balance the rush of sugar. Most sweetened drinks contain both glucose and fructose. Glucose is quickly turned into energy, while fructose, which is sweeter, is more likely to turn into fat.
Fructose is sent to the liver, where it is converted to be burned as fuel. The excess stored away as fat. There is research on sugar intake suggesting that this fat ends up as belly fat.
If you’re trying to lose weight or just trying to maintain it, your best beverage choice is water, which is calorie free. Water helps cleanse your body of unhealthy and unneeded waste, and helps your body function properly. Most of your body — as much as 65 percent — is composed of water.
If you get hungry between meals, drink a glass of water and snack on fresh fruits and vegetables. Whole fruits and vegetables contain fiber and are therefore much more filling than juice. Critically, fruits and veggies are nutrient dense, while being low in calories.
Although energy drinks are touted as healthy, some can have as much added sugar as sodas. Energy is just another word for calories. In fact, in England, calories are referred to as energy. If you’re not exercising for 45 or more minutes, why would you need an energy drink? If they were called “calorie drinks,” people would be a lot more cautious about consuming them.
Other than water, remember that serving sizes matter. Beverage cans and bottles of 6 or 7 ounces were once commonplace. These days, it’s tough to find retail beverages offered in anything less than 12, 16 or even 20 ounce containers. All of those additional ounces represent additional calories.
Lastly, if you think you’re doing yourself a favor by drinking artificially sweetened beverages, you’re not. Studies show that artificial sweeteners alter your metabolism and increase your sweet tooth. Artificial sweeteners are synthetic and intensely sweet, much more than regular sugar itself. They make you want more sugar, which means consuming more calories in the long run.
Research on these sugar substitutes connects diet soda consumption to metabolic syndrome, Type 2 Diabetes and chronic kidney disease. A nine-year study, which followed older adults who drank diet soda daily, showed a 48 percent higher risk of stroke, heart attack and even death. Steer clear.
Remember that liquid calories in just about any form — alcohol, juice or soda — are stealth calories. They are often imperceptible, but they can have an enormous impact on your weight status, as well as your overall health.