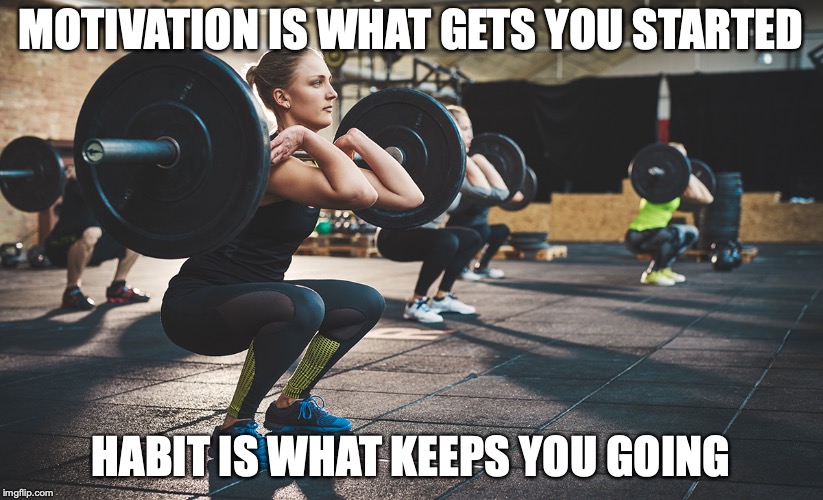 The behavioral patterns that are most often repeated become etched into our neural pathways. For this same reason, the process of repetition allows us to form—and maintain—new habits.
Behaviors eventually become routine, which is what happens for people who exercise regularly. For these people, going to the gym or for a run, for example, become routine behaviors, which in time become habits.
Habits are typically governed by reward. In essence, a habit is something your brain likes. Exercise makes people feel good physically and emotionally. After exercising, people usually feel accomplished and proud. Exercise can make you feel that you’ve done something constructive and beneficial for yourself.
The more consistent an action is, the more likely it is to become a habit. This means that exercising every day is more likely to result in habit formation.
One useful idea is to schedule your exercise for a given time each day, as you would with a personal trainer. Accountability is critical to maintaining your schedule and forming a habit.
If you are planning to begin exercising, start modestly. Don’t take on too much, too soon. In other words, don’t set yourself up for failure. Make it easy for yourself to repeat the behavior. Don’t make exercise so strenuous in the initial stages that it gives you good reason not to do it. Make it easy enough that you set yourself up to succeed. Exercise can become progressively more challenging, or difficult, over time.
Don’t become obsessed with results. Just exercising is the only result you should focus on in the beginning. Don’t concern yourself with high intensities or long durations at the outset. The only result that you should be concerned with at the outset is making exercise habitual.
If your goal is to lose weight, don’t obsess on that. Consider the myriad of health benefits that result from exercise; weight loss is merely one of them, even if it comes slowly.
Be aware of any progress that you’re making. Do your clothes fit better? Can you lift heavier weights? Is your endurance or stamina improving? Are you sleeping better? Do you have more energy? Are your muscles becoming less sore after you’ve been working out for a while?
If you’re a morning person, work out in the morning. Stay true to your nature. If you’re not a morning person, don’t try to force yourself to be one. However, if you plan to exercise after work, bring your gear and go straight to the gym. Don’t go home first because it can only give you reasons to stay home and not work out at all.
Alternating your workouts each day between different exercises (running, swimming, biking and strength training, for example) can be invigorating and motivational. At the least, it can fight boredom and repetition. We’ve all heard the saying, variety is the spice of life. So, spice things up by varying your workouts.
Missing a workout does not mean you have broken the habit formation process or that you have ruined your momentum or rhythm. If you miss a day, don’t go on a guilt trip. Just get going again the next day.
The oft-cited assertion that it takes 21 days to form a habit comes from Dr. Maxwell Maltz’s 1960 best-selling book “Psycho-Cybernetics.” Maltz, who noticed that patients tended to grow accustomed to their surgical outcomes in about 21 days, wrote that, “… it requires a minimum of about 21 days for an old mental image to dissolve and a new one to jell.”
Since then, the 21-day adjustment period has been continually repeated as fact. In reality, Maltz wrote that it took a minimum of 21 days for people to adjust. Yet, research suggests that it usually takes significantly longer than that.
For example, in a 2009 European Journal of Social Psychology study, researchers asked 96 people to attempt to forge a single healthy habit.
They found that it took participants anywhere from 18 to a whopping 254 days to fully form their habit of choice; exactly how long it took depended on how big or lifestyle-changing the habit was. However, the researchers concluded that, on average, it takes 66 days to form a single healthy habit.
So, if you can stick to your exercise plan for roughly two months, your consistent behavior should become engrained as habit.
Remember this: Motivation is what gets you started. Habit is what keeps you going.
The beauty of habits is that they hold up even when motivation wanes, according to a scientific review from the University College London’s Health Behaviour Research Centre.
Newton’s law of motion is a good metaphor for the habit of exercise:
“An object at rest stays at rest and an object in motion stays in motion.”