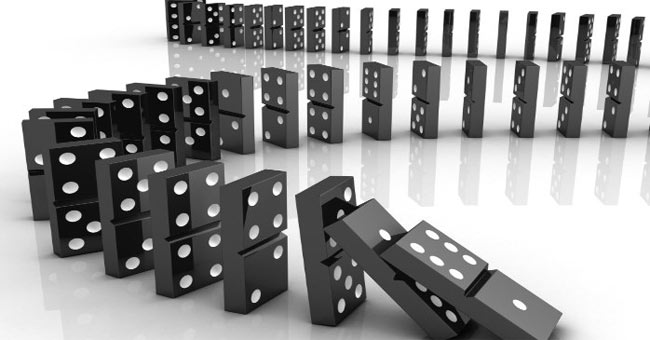 Good Habits Can Have a Domino Effect

We all have various reasons that we work out, assuming we do so at all. For some, it’s to relieve stress and anxiety. Some may feel a great sense of pride and accomplishment afterwards. For others, working out may be a vanity project that provides a sense of confidence and the ability to fit into tight jeans or proudly wear a tank top or a backless dress.
Yet, health outcomes, not simply appearance, should be your main motivation. It’s well established that the health benefits of exercise go beyond the physical. Once you make exercise part of your routine, you may notice a host of psychological benefits, such as feeling more energized, less stressed, and sleeping better.
As you begin to notice how much better exercise makes you feel, the more you’ll want to do it regularly. At that point, exercise becomes a habit. What’s most important is to perform the activities you really enjoy, which will help you adhere to your program.
It’s said that old habits are hard to break and new habits are hard to form. This is especially true with exercise. If you’re not in the habit of exercising, remaining physically inactive is effortless. To create the habit of exercising, however, takes a lot of resolve, determination and effort.
The more consistent an action is, the more likely it is to become a habit. This means that exercising every day is more likely to result in habit formation. One useful idea is to schedule your exercise for a given time each day, as you would with a personal trainer. Accountability is critical to maintaining your schedule and forming a habit.
As Charles Duhigg, author of The Power of Habit notes, “When people start habitually exercising, even just once per week, they start changing other, unrelated patterns in their lives, often unknowingly. They often start eating better, becoming more productive, smoking less and feeling less stressed. It’s not completely clear why. But, for many people, exercise is a keystone habit that triggers widespread, positive change.”
Researchers asked some study participants to write down what they ate once a week. This keystone habit, food journaling, created a structure that helped other habits to flourish. Six months into the study, these participants had lost twice as much weight as the other study participants.
Unfortunately, 42 percent of Americans are obese, according to the CDC, and another 30 percent or so qualify as overweight. So, roughly three-quarters of our population has an unhealthy bodyweight. Because of this, many people view exercise solely as a means of weight loss. But there’s a whole lot more to it than that. The mental and emotional components of exercise cannot be emphasized enough.
Exercise has been shown to increase grey matter in the brain, according to research published by the Mayo Clinic. Exercise also promotes brain plasticity by stimulating the growth of new connections between cells. Consequently, exercise improves cognitive ability and memory.
Furthermore, exercise releases chemicals, such as endorphins and serotonin, that improve your mood. As noted, exercise not only enhances self-esteem, it also reduces anxiety and depressed mood.
“There’s good epidemiological data to suggest that active people are less depressed than inactive people. And people who were active and stopped tend to be more depressed than those who maintain or initiate an exercise program,” says James Blumenthal, PhD, a clinical psychologist at Duke University.
Yet, there’s no denying the impact that exercise can have on our physical health and our ability to function well, aka, perform our activities of daily living.
Don’t wait until your doctor tells you to exercise! At that point, too much time will have been lost.
More than 1-in-3 adults, about 92.1 million people, have at least one type of cardiovascular disease, which is preventable.
In fact, many forms of chronic illness are preventable. According to the CDC, the health-risk behaviors we can change include: lack of exercise/physical activity, poor nutrition, tobacco use and excessive alcohol use. These four behaviors cause much of the illness, suffering and early death related to chronic diseases and conditions. In essence, they are bad habits that can be corrected.
It’s important to remember that health is not just about food and exercise. Everyone would benefit from things such as meditation, learning a new skill, developing a new hobby, and/or growing your social network. Each of these things can make you a healthier person in measurable ways.
If you’re new to exercise or haven’t done it in a long time, start slowly. Don’t take the attitude that you can get fit today or even this week. Allow your body time to adjust to the demands you’re placing on it. Your exercise routine should be progressive, growing in either intensity or duration as your fitness level gradually improves.
The physical effects of exercise — such as weight loss, lower blood pressure or a lower resting heart rate — take time and patience; you may not see your numbers move for weeks to months.
The mood boost from exercise, however, is often immediate, offering near-instant gratification. Alleviating mood disorders, such as anxiety or depression, may take longer, but the mental and emotional effects of exercise are often immediately tangible.
The most important takeaway is that good habits can have a domino effect, with one healthy change leading to another and so on. After committing to a few healthy acts, we’re less likely to back-step and commit unhealthy acts. After all, no one wants to undermine their own progress.
Start with the easiest change you can think of; pick the low hanging fruit first. Once you’ve created a healthy daily habit that lasts a couple of weeks, add another easy-to-achieve step. View these changes as rungs on a ladder; take them one step at a time. Be consistent and be progressive. But don’t take on too much, too soon.
Small victories lead to a sense of pride, achievement and accomplishment. These are all empowering and rewarding feelings. Ultimately, one good change will lead to another.